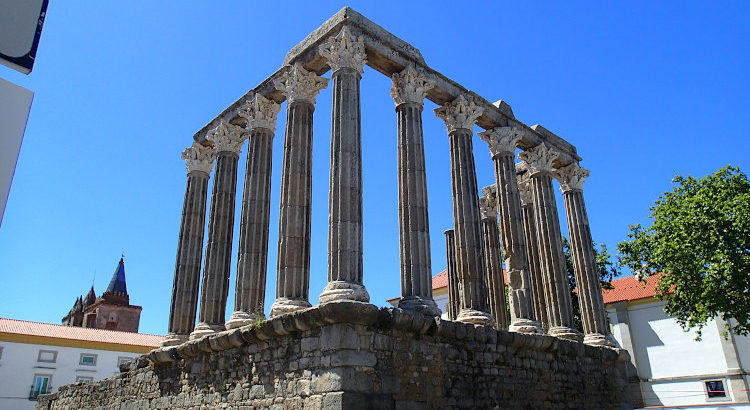 What a great time we had exploring all that Evora had to offer today. We used our moped which was awesome as we can go places cars just cannot fit in this ancient town with all of its narrow roads, or should I say narrow alleys. Some only the smallest of cars, pedestrians and motorcycles could go down. It felt like a real adventure exploring the tiny ancient streets in the historic part of Evora. It really feels like the street layout of the town has not changed since ancient times and you are walking the same streets the Roman inhabitants walked 2000 years ago.

We started off by getting inside the ancient part of the city through one of the few gateways through the impressive city wall. Once inside you are transported back in time to when there were no cars – and they really knew how to build things to last.

The Roman Temple of Evora.

Also originally called the temple of Diana and is part of the historical Roman centre of the city, which was included in the classification by UNESCO as a World Heritage Site.

The temple was constructed in the first century AD in honour of Augustus, who was the first emperor of the Roman empire and was venerated as a god during and after his rule. It was originally part of the towns forum and the centre of activity, social, politic and commercial. Sadly the other buildings have been lost to time, although there are many Roman remains under or incorporated into the present day buildings of the town.

It was destroyed during the 5th century by invading Germanic tribes.

But it was partially restored and later additions were removed to reveal the original remaining elements, to surely everyone’s delight! Today it sits in a large open square with the Evora museum on one side and a delightful small garden on the other side, affording views over the countryside and the aqueduct disappearing into the distant hills.

The cathedral was our next port of call and this was just fantastic. And why would a cathedral be fantastic you might ask. Haven’t we already spent 3 months looking at Cathedrals? Well, it was just so very different in style from lots of cathedrals we have seen before, and especially recently in Spain.

For one, you could actually walk about on the roof (the highest point in Evora with expansive views over the surrounding countryside in all directions) and it had an amazing tower which looked like a fairytale tower. You could imagine Rapunzel would at any time throw her hair out of the window and beg to be saved by a night in shining armour.

The earliest parts of the building date back to the 12th century which means it is incredibly old. The facade and many parts of the cathedral are in a soft rose granite, and despite the fairytale tower, the cathedral has a very heavyset structure and feels very fortress-like. It is built at the highest point of the town and imposes upon the skyline. It seems almost too big for such a small place!

Another really great part of the cathedral was the cloisters which were built, as an add on, in the 14th century. Again amazingly you could get up onto the roof, this time up an even more incredibly narrow and tightly winding spiral staircase which brought you out at the top level with the roof. There was no door up onto the roof; you just appeared out of a hole in the floor!

With the exploring of the staircases, the roofs and the cloisters finished, it was time to go in to view the inside of the cathedral.

It’s the largest of the medieval Romanesque cathedrals in Portugal, and one of its best examples of Gothic architecture. Inside it was very beautiful as you can see. We felt it was a bit expensive to get in at €3.50 per person, and then you had to buy a 50c token for every side chapel to turn on the lights, otherwise, they were in darkness. Seemed a bit much for a small place, but hopefully all funds raised goes towards the upkeep of the cathedral.

Having just visited the Evora Cathedral & Cloisters we could have visited the Church of St Francis, a very early Franciscan church, started within St Francis’ lifetime. But we walked straight by this Church and went next door to one of the best-known and most visited monuments in Evora. The Chapel of Bones is a small interior chapel which gets its name because the interior walls are covered and decorated with human skulls and bones.

The Chapel was built in the 16th century by a Franciscan friar. He wanted to prod his fellow brothers into contemplation and transmit the message of life being transitory.

However, the chapel is more than a religious curiosity as the graveyards of Evora in the 16th century were so overcrowded that exhumation and the construction of the chapel were necessary to create space. The number of skeletons of friars was calculated to be about 5000, coming from the cemeteries that were situated at several dozen churches.

Bones were put into the cement and housed in this chapel as a place of worship. While today we might see building a chapel filled with bones as very creepy, at the time it was aligned with the beliefs of the age and people explained it by saying that, in the chapel, the deceased would be closer to God.

Being British and loving sarcasm we particularly liked the reminder to visitors across the entrance that reads: Nós ossos que aqui estamos, pelos vossos esperamos (We bones that are here, await yours). I can certainly think of worse ways and places to end up than entombed forever in a chapel of bones.

When the Romans ruled Evora they built an aqueduct as they liked to do in their important and busy cities. Unfortunately, in the 6th century AD, a few Germanic tribes turned up, kicked the Romans out and presumably weren’t so interested in personal cleanliness and decorum so they let the aqueduct fall into disrepair.

In the 14th century, Evora was again entering a golden age. Increasingly favoured by the kings of the Aviz dynasty, who set up their court in Evora, the city was brimming with construction activity for new royal palaces, grand houses, churches, convents, and monasteries.

In 1531 King John the third of Portugal decided the city again needed a guaranteed fresh water supply. It took 6 years to clear and refurbish the aqueduct and it finally reopened in 1537.

The Água da Prata Aqueduct, or Aqueduct of Silver Water, was celebrated as a wonder of its time. Winding its way through the countryside the 9km (5.6 miles) long aqueduct supplied the city with drinking water for more than four centuries until 1979.

Since 1979 the water flowing along the aqueduct has been used for the irrigation of Evora’s parks and gardens. We drove out into the countryside of Evora to the beginning of the aqueduct, right to the point where it emerged from the ground. When we got there (see photo above) we lifted up a manhole cover in the top of the covered channel, and amazingly there it was, crystal clear cool water flowing along the aqueduct on its long journey to the city!

The tallest arches of the aqueduct are 26 meters high (78 feet) and in the city, we followed it all the way to the end where the last part is less than 2 meters (6 feet) tall. A few hundred meters before the end the city has evolved around the arches, with tiny houses being built in the spaces between the pillars.

So we had a fabulous time in Evora. We love everything Roman. Last time we did a motor-home trip in 2002 for 8 months we spent lots of that time checking out anything Roman.

Where we stayed in Evora

A big thank you to the Evora local council who provided us with a Free Aire to stay.