Saint Cirq Lapopie and swimming in the river at Vers 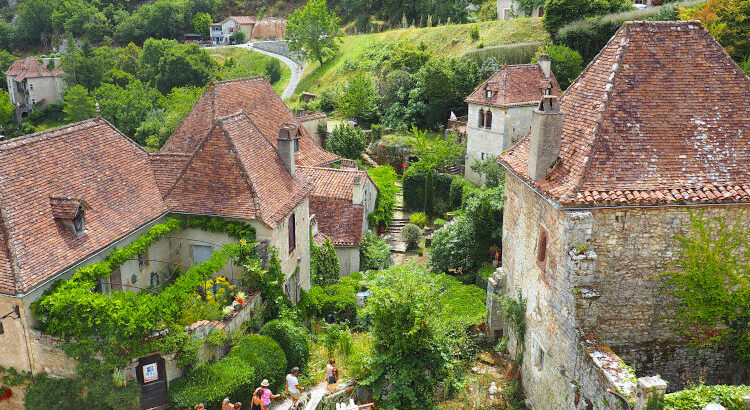 We had a truly great time in Saint Cirq Lapopie area as we met up with some friends who were also in their motorhome. Paul and Sue live in France, but we met them originally in Grand Cayman when they came to visit their daughter Frankie who we worked with.

So for a few days, we got to do some sightseeing and hang out with some great friends including their grandchildren – Harvey and Lucy – who were full of energy.

We parked our van at a campsite area in the Lot valley right next to the river. It was absolutely beautiful and Paul and Harvey enjoyed some fishing each day. However, nobody was allowed to swim in the river as the algae levels were too high at this point.

On the second day, we decided to go for a long walk along the river and visit Saint Cirq Lapopie. Along the way, there were various locks built to the side of the main river channel to allow boats to go up and down the river. They would have originally been built for barges before trains were invented.

It was a great walk and at one stage we came to some big old cliffs with a walkway along the lower edge. Meg, Paul and Sue’s dog also had a fabulous time, and Lucy joined us on her bike.

The cliffs had been cut away alongside the canal to become the tow path where the horses would have walked to tow the canal boats before they had engines. Now these tow paths leave a network of wonderful walks for us all today.

We didn’t walk too much further but before we turned around we checked out some lovely modern rock carvings that had just been done.

It’s amazing what can be done today with modern tools and machines versus the old days of just hammer and chisel.

We then wandered back to a very steep and gravelly path that would take us up the cliffs to the stunning village of Saint Cirq Lapopie.

It was a hot and sweaty climb up 100 metres to the village, but when we got up there the views left….

and right were spectacular.

We then wandered into the village and had a good look around. All the houses were well looked after. Nothing was falling down. Clearly the village was doing well with all those visitors. Half a million tourists visit the village over the summer months. No wonder, it is completely beautiful. A real picture postcard village.

Saint Cirq Lapopie was the chief town of one of three viscounties of Quercy. It was divided among several feudal dynasties in the Middle Ages whose dominant families were the Lapopies, the Gourdons and the Cardaillacs. As a result, several castles and fortified houses were built, each ever stronger, dominating the feudal village. The many beautiful old houses whose facades of stone or wood were enclosed by fortified gates and were all built between the thirteenth and sixteenth centuries. Over the years, the castles have all but disappeared and only one of the gates, Porte de Rocamadour, remains.

The village of Saint Cirq Lapopie was built in a very commanding position, with great views along the river. This ensured Saint Cirq Lapopie became one of the most important towns in the region during the Middle Ages.  Access to the river provided a constant supply of water for tanneries and craftsmen and the river itself facilitated trade throughout France.

Saint Cirq Lapopie is on the French pilgrimage route, the Way Of St James. Coming from Cabrerets pilgrims would pass through the village and then continue to Cahors.

In the 1880s to the 1920s the village attracted a lot of artists and Parisian art-gallery owners and, then from 1950 on, numerous artists belonging to the Surrealist Movement turned up.

André Breton, the co-founder of the Surrealist movement, began living in the village of Saint Cirq Lapopie in the 1950s. He said that he never wanted to be anywhere else. He spent each summer there until his death in 1966.

The historic heart of the village is entirely pedestrianized, allowing you to stroll along alleys, squares and cobbled streets. It’s really not too busy and you can always find a little tucked away corner to be alone. There are the usual collection of interesting gift shops, cute coffee shops and inviting small restaurants, and quality artisan handicraft stores.

In 2012 Saint Cirq Lapopie was elected the Favourite Village of the French by TV viewers and after spending a few hours there it was very obvious why.

It was then time for us to leave the village, go back down the hill and return to our motorhome. The walk down was a lot easier than the walk-up.

The next day we went for a long ride on our moped to the village of Vers. We’d seen the village when we were driving to Saint Cirq Lapopie and had noticed while we drove over a bridge people swimming in the river below.

The little tributary river of Le Vers, that fed into the river Lot, was presumably Ok for dangerous algae levels because loads of people were in river swimming, and there weren’t any warning signs on this stretch. The water seemed very clean and very refreshing.

We joined them and in parts, it was over 6 feet deep. Deby got another chance to swim in a river, after only just enjoying her first time in Onati and then again in the hot springs at Arnedillo. I think we can now tick that item off the bucket list.

The water was coming from the hills somewhere because it was pretty cold. We spent a lovely afternoon just lazing by the side of the river and going for a paddle or a swim to cool down.