Bom Jesus do Monte and all those stairs 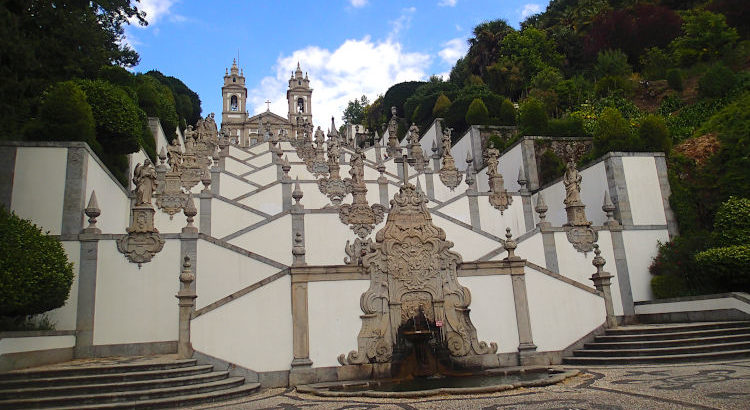 It was just a quick day trip today as we were not going to stay overnight. Oh no, not another monastery! Yes, another religious site but this time something quite different to the large cathedrals and other monastery sites we’ve seen recently such as Alcobaca and Batalha.

Again we were drawn to this place as it had a funicular, one of our favorite forms of quirky transport. We decided to take the funicular up and walk down, otherwise, we would have had to walk up almost 600 steps. The climb was not a steep one and anyway there were plenty of places to rest, so it wouldn’t have been too challenging. However, where was the fun in that when a funicular was on offer, and this was one special funicular.

Work began in March 1880 and the funicular was inaugurated on the 25th March 1882. This is the oldest water-driven funicular in the world. In the picture above you can see the water valves that fill up the train when it gets to the top. The water fills a reservoir under the top car, and when the brake is released, the weight causes the top car to fall and at the same time it pulls up the lower car using a cable. Obviously, the lower car by then has dumped all its water at the bottom station.

It rises 381 feet at a 42-degree angle, so very steep. It’s very quiet because there isn’t any motor at all, and although it’s a short trip up, it’s pretty and fun to do if you like that sort of old fashioned transport, as we do. We found out later that even the brakes were water-cooled. What a very eco-friendly way to travel.

When you get out of the funicular it is just a few steps up to the large patio area in front of the famous church.

Bom Jesus do Monte is a Portuguese sanctuary and it is a notable example of a pilgrimage site with a monumental Baroque stairway leading up through the forest in the lower sections and through gardens in the upper sections. Bom Jesus do Monte means Good Jesus of the Mount.

The church was closed while we were there for cleaning or restoration, which was a shame, but we were still able to peek through the open door and take a few photos. What an amazing and monumental sculpted scene there was at the altar. We would have liked to get a closer look at those Romans etc.

However, we still really enjoyed walking around the park at the top of the hill. The whole estate is free to visit and there are some lovely gardens, forests, parks, monuments and a lake to see.

There was a lake with rowing boats for €1.50 per person, restaurants, a coffee shop, an ice cream shop and a very nice looking hotel. You can drive up via a different route to the upper car park and be right up at the top if you prefer, where there is also some parking for your motorhome.

Instead of getting the funicular lots of people chose to walk up through the sanctuary, although we only saw tourists, not anyone who looked like they were doing any kind of special pilgrimage, or climbing the steps on their knees.

We enjoyed the pleasant walk down through the sanctuary.

Each level had fountains and an ornate patio before going down another set of stairs decorated with statues of the saints, to another fountain, another patio and so on. There were pretty well-kept gardens on each side of the stairs as well.

And eventually, we came out back to the car park again. We had a lovely trip and walk, albeit short, but inexpensive to visit and well worth a stop for a couple of hours.

We parked our motorhome in a car park which was very close to the lower funicular station. There was free parking with a water fountain but no other services. It was an ideal place to park and apparently was quiet overnight. The sat nav readings were 41.552856 -8.381209.