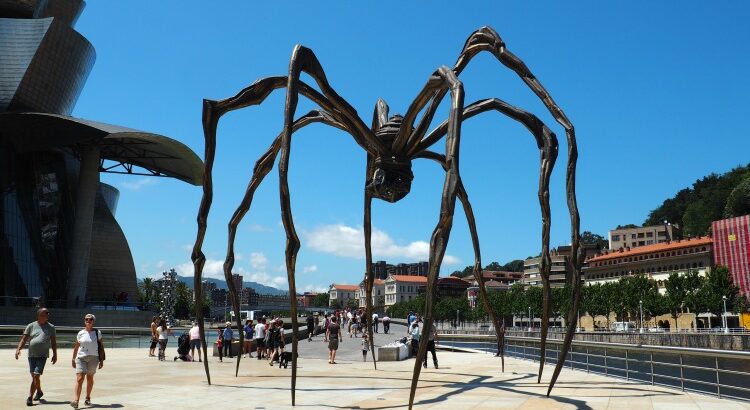 We were thinking of giving Bilbao a miss (seen one city, seen them all?) but we were very glad we didn’t. Our friend Inaki who originates from Spain but has lived in the US for many years always recommended that we went to Bilbao for the food. And this is a recommendation from a chef, high praise indeed.

We stayed at a temporary motorhome parking area that had been set up for a 2-week music festival. It was right under a highway/motorway but amazingly wasn’t noisy at all. Completely free to stay including electricity! Thanks so much Bilbao.

We could have got the metro into the city but because Bilbao was built along the Nervion river the trip into the city was pretty flat so we zoomed about on our moped. We had a fabulous time right next to the river, which in a city is not always the prettiest area, but the weather was good and the traffic was nearly non-existent, albeit it was a Sunday.

We deliberately drove a roundabout way so that we could make a diversion and cross the river on an amazing bridge. It’s called the Viscaya Bridge and we’ve never seen anything like it. It’s a bit of a stretch to even call it a bridge.

It is commonly known as Puente Colgante, which is literally the “hanging bridge”.

It’s the world’s oldest transporter bridge and was built in 1893. It was designed by Alberto Palacio who was one of Gustave Eiffel’s disciples.

It was the solution given by the engineer to the problem of connecting the towns of Portugalete and Getxo without disrupting the maritime traffic of the Port of Bilbao and without having to build a massive structure with long ramps. Palacio wanted to design a bridge that could transport passengers and cargo, and that could still allow ships to go through.

The ‘bridge’ is 164 meters long and its gondola can transport six cars and several dozen passengers in one and a half minutes. There was plenty of room for our moped and us as there were only 4 cars in the queue.

It operates every 8 minutes during the day and every hour at night, all year round, with different fares for day and night services. An estimated four million passengers and half a million vehicles use the bridge annually. There are also visitor lifts installed in the 50-metre-high pillars of the bridge that means you can walk over the bridge’s platform. That must be some view from up there. Not for us!

We then had a long and fun journey on the moped driving all along the edge of the river and docks into the city to find our next wonderful thing to see – the Guggenheim Museum.

Well, what an incredible set of buildings, artworks and sculptures they have on show, and that was just on the outside of the building. We didn’t actually go into the museum, we’ve seen so much recently that it was nice to just take a break and wander.

We just enjoyed the outside like apparently lots of people do. The Guggenheim Museum has too much modern art for us. We both think modern art is complete bollox, nearly all of the time.

The Solomon R. Guggenheim Foundation selected Frank Gehry as the architect, and its director, Thomas Krens, encouraged him to design something daring and innovative.

It was opened to the public in 1997. And amazingly the building was constructed on time and within budget, which is surely unheard of. Has any public building in the UK EVER come in on budget and time?

And finally, we couldn’t see Bilbao and ignore Inaki’s advice about the food, so we went to the Ribera Market for late lunch. We had a fantastic selection of tapas and some coffee. It was stall upon stall of the most beautifully displayed mini snacks to tempt us, and was very affordable. (Too busy eating to take photos!)

The Ribera Market was recognized in 1990 as the most complete municipal food market by the Guinness Book of Records, at that time being the largest in terms of traders and stalls and the biggest covered market as regards space in the whole of Europe, with a surface area of 10,000 square metres. However, unfortunately for us, it was Sunday and it was closed, but we were able to get into the bar and restaurant area.

So we had a fab time in Bilbao with lots of zooming about on our moped. Seems like a nice city to visit, and that bridge experience – got to go just for that!