The medieval walled city of Avila 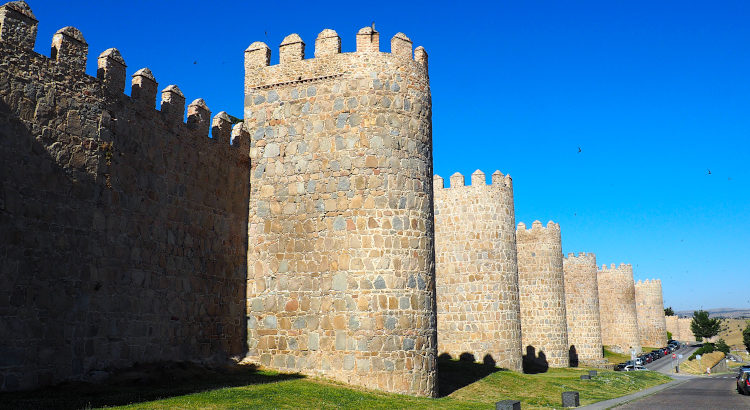 Avila is the capital of the Spanish province of the same name. It’s a city in the rolling hill countryside northwest of Madrid. It’s one of the must-see sights of the region and something truly unique and astonishing.

It’s best known for its intact medieval city walls, with 80-plus crenellated, semicircular towers. The walls are complete and extend for a total length of two and a half kilometres or a mighty one and a half miles long.

It has 9 gates, including the arched El Alcazar, on the eastern side. It would have had a lot less than 9 gates in its day as every gate is normally a weak point for your enemy to attack. But as the city needed to modernise and expand, and times became more peaceful, more gates into the city were created to allow for easier trade and movement of people and goods.

You can walk on the walls for €5 each over two sections which extend for 1.6 kilometres or 1 mile so you really can walk pretty much most of it. Many of the towers are open and there is an audio guide to tell you the history of the town and walls as you walk. It’s really fascinating and well worth a visit – although in the height of summer it can be darned hot up there so wear a hat.

At night, the lighted walls are a distinctive sight and the perfect opportunity to leave the motorhome for some night photography.

Apparently, the Walls of Avila is the largest fully illuminated monument in the world.

The walls date from the year 1090, however, Avila has a lot of history before then. In the 5th Century BC, the Vettones (Celts) lived there. Then the Romans turned up. After the fall of the Western Roman Empire Avila became a stronghold of the Visigoths (Nomadic Germans). They were conquered by the Moors, who in turn were repeatedly attacked by the northern Iberian Christian kingdoms. The place became a virtual uninhabited no man’s land until it was repopulated about 1088 following the definitive reconquest of the area by the son in law of King Alfonso VI of Leon and Castile.

Roman remains that are embedded in the city walls at the eastern and southern entrances (now the Alcazar and Rastro Gates) appear to have been ashlar altar stones.

Inside the city, there are great places to explore. It’s described as perhaps the most complete original 16th-century town in Spain.  A lot of it is pedestrianised and there are pretty squares and courtyards to be explored with colorful cafes and restaurants. Look out for the menu de dia great value set lunches.

On quite possibly the ugliest Cathedral we have ever seen, that had been built over many hundreds of years with some terrible workmanship, we found this. Look at those fantastic leggings. Our audioguide didn’t give us any clues what this was supposed to represent. We didn’t go inside the Cathedral and could only assume that it couldn’t have been worse than the ugly outside.

We’d also read about Avila’s “Yemas” egg yolk cakes, sometimes referred to as orange balls. Everything we’d read said you must buy some of these treats which are native to Avila. These sweets are round in shape and their orangey yellow colour comes from the egg yolk, which is their main ingredient. They are basically sugar and egg yolk mixed together and formed into balls – and looked a lot better than they tasted. They were OK but we didn’t go back and buy anymore which tells you something. We expected them to taste of oranges, but they didn’t. They just tasted like raw eggs and sugar. Not so nice.

Overall though we had a great time in Avila and would definitely recommend a visit. Just skip the orange balls.

There is a very large car and coach park just outside the city walls which is free to park. Easy walking distance into the city. Close to the police station, busy and safe with lots of room. No services but ideal for a couple of nights stay to visit the city. See our map page for the exact location and GPS.