Wild camping and a hilltop castle in Denia 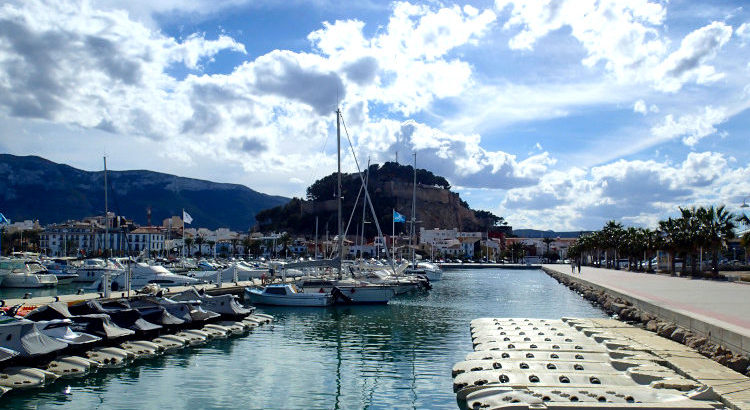 Funny sometimes how things turn out SO much better than you were expecting. Everything about Denia was better than expected – so much so that we found ourselves looking in estate agent windows to see just how much it might cost to move here! We’ve only been on the road a few weeks and already found somewhere we loved and could consider living one day.

Nothing especially attracted us to Denia originally. It was a convenient stopping point on the way south through the Spanish coast. We found what looked like wild camping (free camping) spot on the Search for Sites app, on a large car park close to the beach, set the nav and wow! It was lovely there.

We pulled up onto the sand with the van facing the beach and sea, along with about 10 other campers. The view was gorgeous. There is a lovely restaurant right next door, it’s very close to town, the marina, the wonderful promenade and within easy walking distance of the castle and several supermarkets.

OK, there are no facilities here other than a place to dump your rubbish. Nowhere to fill up with fresh water, dump ‘grey’ water or empty the toilet. But we came prepared so we are all good for a few days with what we have on board. The solar panel does a grand job keeping our electricity topped up and we were able to use the internet, the laptops and watch TV etc, all without taking anything out of the batteries.

The castle in Denia old town really dominates the landscape. Built right in the of town, atop a huge rock pillar with vertical sides, it gives a commanding view of the surrounding coast and countryside so any would-be attackers could be seen from all directions. Dating back originally to the 11th century and built by the Muslim Arabs, it has been updated and improved several times since, notably by the French in the 19th Century.

The castle was an important fortress and defense for what was then the capital of the Muslim Kingdom in the Valencian region. The port of Denia was important strategically and for flourishing international trade. Raisins were one of the main exports from the Denia area and many were grown on the terraces within the castle walls.

The castle covers quite a large area and although not heavily restored, you can imagine in days gone by where it would have combined all the things a town needed including farming areas, housing, fortifications an , , shops, a well etc. The views from the top overlooking the marina and the old town are quite spectacular. We turned the corner at the top to come across an unexpected and charming little coffee shop where we enjoyed two coffees and a chocolate muffin for €5.

Opening hours depend on the season. In the winter, when we visited, it was open 10am to 6pm. Entry costs €3 for adults. There is no audio tour and no information boards around, but at the time of our visit, they were being installed so hopefully there will be some information available in English.

March is Fallas month in the Valencia region, and while the city of Valencia has the biggest and loudest celebrations, many of the other towns in the region take part with their own statues and fireworks. Kids everywhere are letting off firecrackers, there is a floral offering to Our Lady of Desamparados and the event is finished with the burning of the Fallas figures in ‘La Crema’ – the burning.

It’s a fascinating festival often with satirical (the puppets/dolls/statues) to celebrate St Joseph. Read more about the Fallas festival on Wikipedia here. It’s about as close as you can get to deliberately setting your city on fire without there being a riot.

Each year the town ‘forgives’ one of the Fallas figures (made from cardboard and papier mache), and it is saved from burning and put into the Fallas museum. Here are just a few of the ones in the free exhibit on the waterfront in Denia. (You can click to see enlarged photos.)

It’s incredible to think these are only made from papier mache and paint – and are designed to be burned! We had left before any of the statues were set out yet for this year. We will be in Benidorm for La Crema so will have to look up and see if they have anything planned for the event.

Other things we loved about Denia:

Denia is defintely a place worth visiting. Stay for several days. We managed 4 nights before we really had to move on so that we could fill up with water and empty our waste. But we would have stayed longer if we could – the free camping is excellent.