Batalha Monastery including the unfinished chapels 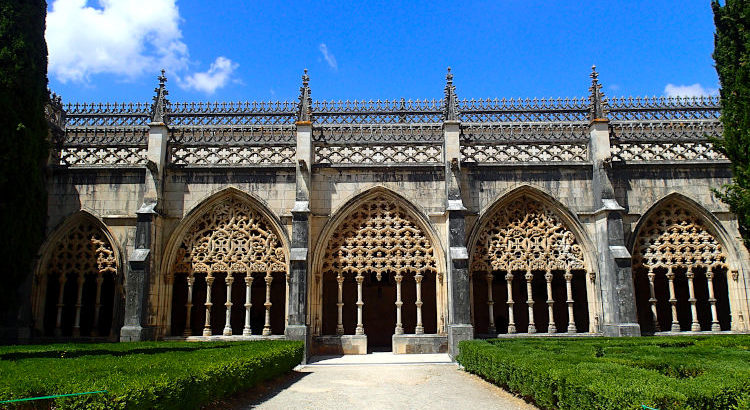 The Monastery Of Batalha (literally the Monastery of the Battle) is a Dominican Convent which was originally and officially known as The Monastery of Saint Mary of the Victory. It was built in commemoration of the 1385 Battle of Aljubarrota.

This was a battle between a force of 6,600 Portugal and some English long bowmen who were up against a force of 31,000 invaders from Spain, France and Italy. The Portuguese and English won the day even though the other side had nearly 5 times the number of men. The English were there to honour the Anglo-Portuguese Treaty of 1373 (still the oldest ACTIVE international treaty in the world). This victory of Aljubarrota confirmed John of Aviz as the uncontested King of Portugal and the House of Aviz ascended to the crown of Portugal.

It took over one hundred and thirty years to build, not even finished, starting in 1386 and ending circa 1517, spanning the reign of seven kings. The construction came to a halt in 1517 when the then King (John III) decided to put all his efforts into the construction of the Jeronimos Monastery in Lisbon.

The church is vast and narrow, just 22 metres (72 feet) in proportion to its height of 32.4 metres (106 feet). Its interior is very austere with its complete lack of ornaments, stonework decoration and statues. It’s very similar in style to the Cistercian Monastery we visited at Alcobaca – just plain and empty. Somehow the simplicity is beautiful in itself, and very serene.

But that’s the main part of the church. When you visit some of the royal chapels the story changes. Take this section, the Founder’s Chapel – extraordinary! It has an incredibly beautiful ceiling, see above.

In the middle below the ceiling was the joint tomb of King John I of Portugal and his wife Philippa of Lancaster (England). Their statues lie with clasped hands, expressing the good relations between Portugal and England, and hopefully the good relations between man and wife. In this royal chapel, there are ornate stained glass windows, exceptional carved stonework and tombs to die for – literally!

In the same room, on one of the walls were the tombs of four sons of the King and Queen. They had 9 children of which 6 lived to a good age. Edward became a future King while the incredible tomb above was for Henry, who became known as Henry the Navigator. We’d seen a few references to Henry the Navigator in our travels around Portugal so far, and it’s apparent he is very highly regarded in Portuguese history. He was a central figure in the early days of the Portuguese Empire and in the 15th-century European maritime discoveries and maritime expansion. Through his administrative direction, he is regarded as the main initiator of what would be known as the Age Of Discovery.

We then left the church and entered the Monastery. It was large and beautiful but unlike Alcobaca Monastery we couldn’t see inside many of the rooms. The cloister had very beautiful arches in several different designs and neat gardens in the centre.

The Chapter House here houses the Tomb of the Unknown Soldier and we were lucky enough to see the changing of the guards during our visit. We didn’t take a video, but here’s an example.

In the refectory, there was a small museum of gifts made to the Unknown Soldier, including a wreath laid by our Queen, and lots of medals that had been donated. But those were the only rooms we saw and they were just bare and not especially interesting like Alcobaca had been. The visit was much shorter and quite different to that other one, but still had its highlights – and one is coming up at the end of the tour.

We then went into what we thought was the best part of the whole complex, the Pantheon of King Duarte, most commonly known as the Imperfect or Unfinished Chapels.

This place had so much atmosphere it was incredible. This was helped quite a bit by the fact it did not have a roof, and never has had, although one had originally been planned. The spires come to an abrupt stop, fully decorated, but just never finished, as was the chapel interior and roof.

The archway leading out to the part with no roof was one of the most amazingly decorated pieces of stone we had ever seen. The new royal chapel is annexed right onto the main part of the church and just comes out like an extension. This massive multi-part arch leads from the anteroom into the new royal chapel.

Each alcove in the chapel includes beautiful stained glass windows and ornate architecture and stone work. In the thicker walls of the columns between the arches are tiny gated rooms with tight spiral stair cases that lead up to the roof, but being unfinished and quite open, this isn’t open to the public.

And then again there is a double tomb of a King and Queen, this time King Duarte and Queen Leonor, both holding hands.

The Founder’s Room and the Unfinished Chapel are both stunning highlights of the Batalha Monastery and makes it worth a visit, even if it doesn’t have quite the same interest as Alcobaca in the rooms off the cloister. Both have their own charms.

One of the wonders of Portugal

On the 7th December 2006, six-month-long public elections started to select the top seven wonders of Portugal. All citizens of Portugal got to vote and they could cast their vote via the internet, telephone or by texting. The results of the vote were announced on 7 July 2007 and Batalha Monastery came 3rd. So we have just seen the bronze medal winner of the Seven Wonders of Portugal! So we had now seen 4 of the 7 Wonders of Portugal. We missed 2 in Lisbon but the number ONE awaits us in Braga – the Castle of Guimaraes.