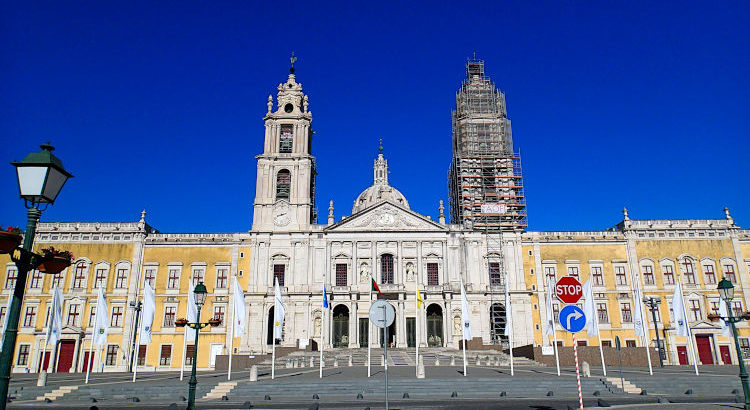 The Palace of Mafra, which also served as a Franciscan Friary, was built for the Queen of Portugal. The king promised to have a convent built for his wife if she gave him offspring. Seems a strange gift to us today, but he probably meant well!

After the birth of their first daughter construction began in 1717 and was completely finished in 1755.

Initially, it was supposed to be a small project for a friary of 13 friars, who were to live in strict poverty. However, a bit like when someone wins a massive amount of money on the lottery, plans changed.

Large amounts of gold started to arrive in Lisbon from the Portuguese colony of Brazil. The king changed his plans so that a very much enlarged friary was built together with a sumptuous huge palace for the Royals.

The palace was conveniently located near royal hunting reserves and was usually a secondary residence for the royal family.

The Palace is absolutely massive! Here are a few of its features:

It has many more features but those were some of the more interesting ones.

Besides holding 330 friars it could also hold a King and a Queen. The King’s apartments were in one tower while the Queen’s apartments were all the way at the other end of the Palace in the other tower.
Such was this distance (200metres) that, when the king left his apartment towards the apartment of the queen, this was announced to the queen by the sound of a trumpet. That would have given her 10 minutes to get ready! Such was the distance that today you would be completely justified in texting or emailing your other half living in the same house.

The whole length of the front between the two towers of the Mafra National Palace there was a long promenade gallery displaying amazing art and sculptures. You could easily get your 10k steps a day completed through there.

Sadly the palace didn’t give you any kind of map or leaflet, and there was no audio guide so it wasn’t always obvious what you were looking at. We think this amazingly beautiful room was perhaps the throne room. All the walls and the ceilings were painted in the most sumptuous rich colours and gilding. There were no paintings on canvas, just all the walls and ceiling had been painted and it was stunning!

At each end of the room, there were the most astonishing 3d effect paintings. Yes, this above isn’t a sculpture, its a completely flat wall. It was incredible and must have been magical to people hundreds of years ago. The other paint effects in the room were very powerful, especially the statues in the niches, but these central figures were the most spectacular.

One of our favourite rooms was along the South corridor near where the Queen’s chamber was. It was a music and games room for the ladies, while the guys had a snooker and billiards room next door.

And then next to the men’s room was surely another men’s room or the Room Of Carnage as Deby called it. It was clearly the hunting trophy room. Obviously not in fashion today and abhorrent to animal lovers, but it shows the function of the palace and how important hunting was to the royal family and their visitors.

The palace became effectively a hunting lodge for the Royals at the end. They didn’t reside there because they found the place too cold and gloomy. Even quite disturbing suites of furniture were made from animal parts. It made my skin crawl just to look at this stuff. We can only hope that all the antlers came from the animals natural moulting, but the skins and stuffed heads – not so much 🙁

And then there was the library. Wow and bloody wow. It is truly the highlight of this palace. What a very special place. Occupying most of the rear wing of the palace, at 88 meters long it is the longest Rococo monastic library in the world. It’s vast and very beautiful. There are further sections off left and right of the centre, making a cross shape, but to protect the books the public aren’t allowed unrestricted access.

This room is surely a cathedral to learning. It was spectacular! The library contains over 36,000 leather-bound volumes, showing the extent of western knowledge from the 14th to the 19th century.

It contains a lot of very important books apparently that can be viewed by appointment by speciality approved persons with a specific professional interest. Not us then!


Some rare works furnish its shelves to this day, as incunabula (books printed until 1500) like the Nuremberg Chronicle (1493), and other precious books as the Theatrvm Orbis Terrarvm by Ortelius (1595), the famous Nuremberg Chronicle and the first encyclopedia – known as Diderot et d’Alembert. Also, a nucleus of scores from musicians such as João de Sousa Carvalho or Marcos Portugal, composed expressly to be played on the Palace Basilica’s six organs.

The library is known for homing bats which protect the books from insect damage at night, which is a very novel way of caring for the books. The tiny bats measure just an inch long.

We would have loved to sit there all morning with some of the books and have a good look through them. However, in glass cases in the next room, there were about a dozen on display dating from the 1700s, mostly about mathematics and engineering.

The Royal Palace was upstairs while downstairs was where the friars lived. The convent and infirmary were absolutely fascinating. When you first walked in there was this most amazingly huge semi-circular painting and it looked like the friars lived in rooms just like the Palace on the floor above. So much for their vows of poverty!

However, you then walked into a very different area. First, we pass the simple cells of the friars, and a small dispensary still complete with jars and bottles, and mortar and pestle. Then into the ward of the infirmary.

The sick and injured were treated in cubicles positioned along the walls of the long hall, each screened with heavy drapes for privacy. At the head of each simple oak bed is a tiled panel of Christ, and at the foot, one of the Virgin Mary. At one end of the ward is a chapel, its altarpiece a depiction of The Virgin Mary. On Sundays, the beds were pulled into the centre of the ward so that patients could see and hear mass. The steps near the chapel lead down to the cemetery, so perhaps the medical treatment offered wasn’t always successful.

We’ve never seen anything like before in all our travels. Well worth admission just to see something so unique.

We then found the kitchen for the convent. Besides this kitchen the King also had a kitchen and the Queen had a kitchen as well. No doubt when holding large hunting banquets, both royal kitchens would have been hard at work.

We were most impressed by the inside of this Palace. However, it was strange how there weren’t any gardens. They must have had them before but sold off all the lands. The Palace now faces straight out onto the road. The Palace does have great sea views, however.

The entry was €6 each and it took us about 75 minutes to walk around. Lots of the displays were very old fashioned, in dark wood cabinets with no lighting and no descriptions at all. There were only the most minimal descriptions of some of the rooms and no leaflet or anything was given to us about the history of the palace. There was a lot of very nice art that must have been very old and important but there was no information on any of it. The place would have benefited from an audioguide for sure.

For early June on a very warm day, albeit the morning, the place felt very cold even though it was roasting outside. The royal family were said to not like it here, finding it too gloomy and mostly inhabited the rooms along the south corridor.

Overall I’m sure the money could have been spent much better. But that was pretty typical of European Royalty. Me, me, me, me, me! When all that money came into Portugal from the gold in Brazil, it could have been put to use to the benefit of the country or the people, but no, let’s build a massive palace instead and never live there. Sigh.

In 1849 the monastery part of the building was assigned to the military, a situation still in use today.

However, just like the end of the religious orders powers and prosperity, the Portuguese Royalty came to an end in 1910. The last king of Portugal, Manuel II, following the proclamation of the republic, left on the 5th of October 1910 from the palace to the nearby coastal village of Ericeira on his way to exile. The palace was declared a national monument in 1907.

We had a good time visiting Mafra Palace and we were very happy with the free motorhome parking arrangements that the Mafra Council had organised for us. You can see where we parked for free (including EHU) here.