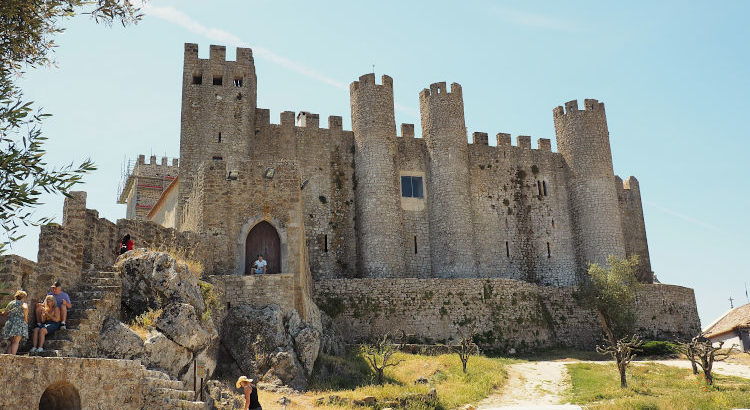 Obidos – a visit of two halves. I imagine if you get to Obidos early in the morning or much later in the day when the damned coach parties have gone then we are sure you would enjoy it. We timed our visit badly and got a terrible first impression. It could have been so much better if we could have snapped our fingers and made everyone go away.

Because we didn’t have to travel far to get to Obidos, Nige let Deby have a nice lie in, so we didn’t actually get inside to the main street until about 11:30. At that time it was horrible, absolutely packed with people, and totally lined with endless souvenir shops. We didn’t like it at all, we both just felt like turning around and leaving, but we’d been told the place was fantastic so we persevered.

Walking the walls of Obidos

Obidos is a walled town. The Moors were pushed out in 1148. The castle and the walls were remodelled after 1279, while the keep was created in the 14th Century. The 1755 earthquake caused damage to the village walls, a few churches and many buildings. However, it is obvious that there has been an awful lot of restoration of the city walls recently. It appears they have been almost entirely rebuilt from what would have been rubble.

The walls are great but it’s pandemonium trying to walk anywhere on the wall. There is no one agreed-upon direction of travel, so people come up and down all over and then try to cross on really narrow ledges with an unprotected big drop down the inner edge. One large person and its chaos! During our visit, one large lady with very wide hips was walking the wall (good on her for getting up there and doing it), but she was so wide that no one could get past her without falling off the edge so it was crazy with everyone trying to go back and forward and pass each other.

There should be some kind of arrows to point out the one way around the walls, not that everyone would take notice but we were amazed that no one plunged to their death 30 to 50 feet below – onto ROCKS. In England, it just wouldn’t be allowed – which made it awesome!

Unfortunately, the castle keep is now a posh hotel so you cannot look around in there but they must have some fabulous rooms, mustn’t they?

Each July Obidos castle hosts a traditional ‘Medieval Market’. For two weeks the castle and the surrounding town recreate the spirit of medieval Europe. Flowing banners and flags set the mood, together with hundreds of entertainers and stall holders dressed as merchants, jugglers, jesters, wandering minstrels, soldiers and more. Visitors can shop at the traditional handcrafts fair or watch medieval shows, horse displays and a costumed parade that winds its way through the streets. There are also displays of jousting knights and armed combat.

Spit roasted hog, hearty soups, rabbit, lamb, cod, quail, sausages and other grilled meats are just some of the many medieval style meals on offer from dozens of “taverns” and stalls spread throughout the market. Drinking from pewter tankards and eating from wooden trenchers all adds up to an awesome experience.

We were there on the 1st of June so all we got to see of that was a big mess. There were big piles of rubbish and wood, and messy looking cheap shacks, all sat deserted inside the walls in a big weedy wasteground, alongside cars that were all dirty with flat tyres and looked like they hadn’t moved in months. Those parts just weren’t nice to look at; the place was a mess. It looks like there is a huge effort made for those two weeks of the festival, and then for the rest of the year they just leave everything in a big ole mess. It was quite disappointing.

Once we’d climbed all over the walls we decided to get away from the masses and walk around the quieter outer streets, near the inside of the walls. We felt a lot happier there. There we felt the real charm of the narrow cobbled streets and the whitewashed houses – away from all the crowds that stole that authentic feeling away.

Then we found a really nice reasonably priced place for lunch where half of the hilly street had chairs and tables and there was an awesome breeze to cool us down. Deby had sheep’s cheese for the very first time. She also tried Obidos’s famous Ginja cherry liqueur in a tiny chocolate cup. You get to drink the cherry liqueur and then eat the chocolate cup. Yum.

Once lunch was over we started walking again and came across a wedding at The Church of Santa Maria. This was the setting for the wedding of King Afonso V to his cousin, Princess Isabella of Coimbra, on 15 August 1441, when they were aged 9 and 10, which is a tad young! I guess with cousins marrying it was a bit like a red neck US wedding today.

After that, we returned to the main touristy street and it was like we had gone back in time. Where had everybody gone? They’d ‘done’ Obidos in 15 minutes and buggered off back onto their coaches. We almost had the place to ourselves. Much nicer than when we arrived.

While we were walking along at 1.00pm lots of the shops were actually shutting down for their lunch. The whole manic place was suddenly much quieter and much more charming. Deby just had time to buy herself a bottle of the cherry liqueur – half a litre for €12.50, as the shop was closing.

Then outside the walls, we found the aqueduct which was definitely NOT Roman, made much later to supply the town with water but based on Roman engineering and design. It was still great to see and photograph.

One of the Wonders of Portugal

On the 7th December 2006, six-month-long public elections started to select the top seven wonders of Portugal. All citizens of Portugal got to vote and they could cast their vote via the internet, telephone or by texting. The results of the vote were announced on 7 July 2007 and Obidos castle came 2nd. So we have seen the 2nd wonder of Portugal!

Looking back we really should have stayed the night and gone back early the next morning, instead of arriving, visiting and moving on during the busiest hours. Overall, after a crap first half of the game, the second half was a blinder! Obidos is certainly worth a visit, but make sure to avoid the times when all the coaches turn up! Happy days.