Capricho Gaudi. The Caprice, a small but comfortable house 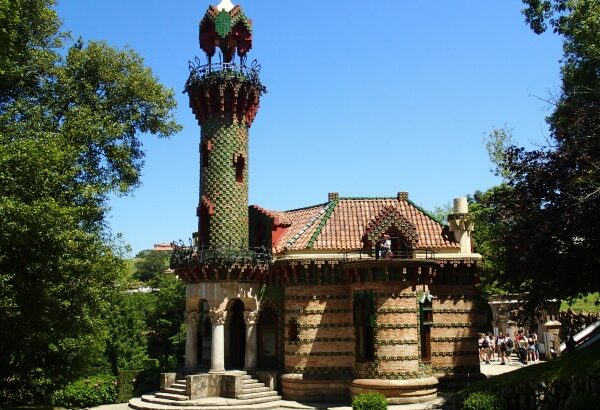 We went to the coastal town of Comillas, in Cantabria, in the North of Spain for one reason only, to visit The Caprice designed by one of our favorite architects, Gaudi. He is an architectural genius who creates masterpieces and his attention to detail is second to none.

The owner Maximo Diaz de Quijano, a lawyer by profession and keen musician, asked Gaudi to design him a summer villa. This “small but comfortable” house was named The Caprice, which is a fast piece of music that breaks with the norms. The large variety of colours and the combination of numerous shapes, materials and textures that are on the outside of the house gave rise to the other name that Villa Quijano is better known by, “The Caprice”.

This Gaudi design does not incorporate any of the constructive ideas that would later bring fame to the artist. However, the young Gaudi, aged 31, did create an original and colourful work by combining brick, tiles, stone, slates and wrought iron, in a daring exercise inspired by Moorish, Mudejar and Oriental styles, which so influenced his early works.

The architect proposed a “u-shaped” floor around a south-facing greenhouse (conservatory) that would fulfil the function of being the centre of the house’s private activity.

Gaudi divided the house into three levels, the semi-basement, the main floor and the attic. The basement and attic were for the servants to use. The kitchen, the pantries, storage and the stables with coach house was in the basement. The rooms in the attic were divided into two sectors due to the living rooms double height and were used for the house staff’s bedrooms and the laundry room.

The central floor, the main floor, was for the exclusive use of its owner Diaz de Quijano. However, despite the importance of the house’s internal organisation and distribution, what is particularly striking is the decorative scheme used by the architect on the outside of the house. Gaudi actually designed the structure of The Caprice in quite a traditional way, very unlike a lot of his later works.

The house took two years to build and was finished in 1885. Very sadly, despite still being young, the owner died before being able to enjoy the fabulous house.

We particularly loved the two balconies on the Northside of the building which had ingenious canopy-benches to sit on. The ironwork is gorgeous and it’s so clever how the railings morph into the benches that hang out over the floor area of the balcony to make it more spacious.

There was a corridor running pretty much East to West which divided the rooms on the North (Living room, dining room, bathroom) from the greenhouse on the South.

Gaudi put log fireplaces in all the main rooms of the house and decorated them with tiles, iron and wood. We are always so mesmerized by architecture where every single element of the build was custom designed by the architect – from the woodwork to the door handles, the tiles on the fireplace, the light fittings, the stained glass – every single thing bespoke designed for this house. Can you imagine how much that would cost today?

In support of Quijano’s passion, Gaudi put musical motifs on window panes and a mechanism that made a sound when the windows were opened. These are stained glass windows with a sparrow on an organ and a dragonfly with guitar.

Up in the attic, we found this beautiful high ceiling room. Which member of staff had this as a bedroom? Or maybe it was more like a staff dormitary.

And at the other part of the attic, we found this lovely furniture designed by Gaudi.

We had an absolutely fabulous time at The Caprice, which was one of Gaudi’s creations that we had not seen before. Everything about it was just beautiful including not too many other tourists getting in our way. Happy days.