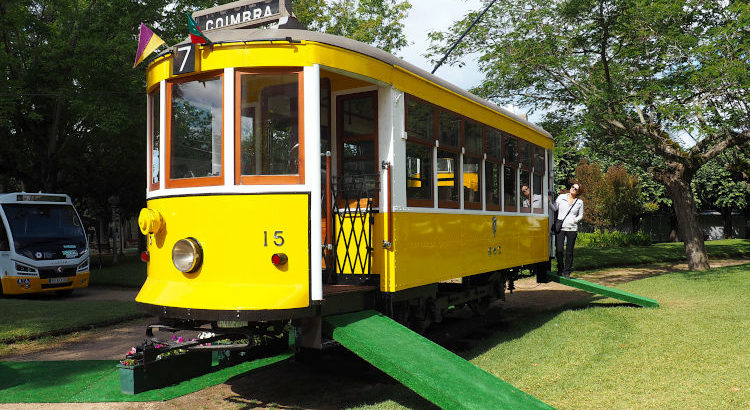 From our parking site next to the rowing club on the other side of the river, we walked into Coimbra over a pedestrian bridge and this is the first view we got of Coimbra. It’s built very much into the steep hillside on the side of the river. You don’t realise quite how steep until you have to climb up from the river to the University buildings at the top!

Just the other side of the river we spotted this beautiful old bus and tram. We just had to take some photos. Ah the joys of public transport in the old days before everyone went one to a car. The old tram was especially gorgeous.

It was then time to climb up, up and up, to our first of three main visits of the day. This was to the renown University of Coimbra.

The university was founded in the year 1290 in Lisbon, not Coimbra. It moved permanently (I don’t think literally brick by brick) to Coimbra in 1537. It’s the oldest university in Portugal, and one of the oldest universities in continuous operation in the world. It must truly be a fascinating place to study.

So we went through the main entrance gate which opened up into a huge courtyard.

At one end of the courtyard was a huge statue of King John III who decided in 1537, after 3 centuries of roaming, to settle the university in Coimbra, where it was installed in the Alcacova Palace. We thought he looked a little like England’s Henry VIII.

It was now time for the highlight of our trip to the university to the very famous and old library. On the ground floor where there were student prisons, yes prisons, we were able to take photos with a flash, however, there really wasn’t anything of interest or note to take a photo of. Then on the next floor, the intermediate floor, we could take photos but with no flash. Our photos were of a boring and nondescript library, albeit with very old books no doubt. We are not going to show you any of the photos, they were as boring as the intermediate floor was and I mean the floor.

It was then time for us to go up to the Noble Floor, at 10.40 am. We were allotted a specific time with about another 48 people and the Noble Floor was truly amazing. But here you cannot take ANY photos. We only have memories, which will have gone in about a week at our age! What a load of bollox I say! We did get a photo of the door that we exited, that’s above.

See more about the historic and beautiful library here on the official website.

We then went next door to St Michael’s Chapel where you could take photos. Deby took some really nice panoramic photos using the special setting on her camera but we’ve not worked out how to get these on the blog without them looking really tiny because they are long and thin… hmmm.

The Royal Palace was the next place in the courtyard for us to visit where we walked through the Hall of Arms and were able to look into the yellow room (because it was painted yellow). Many of the official ceremonies of the University are still carried out in theses ancient rooms today.

And then we were able to walk around the upper level of the Ceremonial Hall, that used to be the Throne Hall and stare down on a student who looked to be giving her dissertation to a panel of 5 from the Portuguese Inquisition. Not too nerve-wracking then! Three other victims (students) looked to be waiting their turn.

Our visit to the university was over except our ticket €12.50 each, included entrance to two other old buildings a little walk away that housed the science museum etc. There were old lecture rooms like the one above.

And there were also rooms that housed incredibly old apparatus and equipment that would have been used in those lecture rooms etc. Deby got to try out her panoramic mode on her camera above, but it does make things look a bit distorted.

Here Deby got to see how a fly sees the world. We had a good time at the University with the only disappointment being that we could not take photos of the old library.

If you want to pet the cats and kittens then they are kept in a separate room. We bought lunch and a coffee each so the petting seemed to be free. There was a sign that said €5 to pet the cats, so I guess if you just want to play with the cats then that’s what you have to pay.

Our last visit of the day was to the Botanical Gardens of the University of Coimbra. However, before we wandered into the gardens, at the top end, there was an aqueduct to check out. We do love a good roman ruin.

This 16th Century aqueduct, built between 1568 and 1570, is a real beauty. We followed the aqueduct until it disappeared over a wall and then one quick turn and we were into the botanical gardens.

We first of all checked out the vast green house and by checked out I mean looked through the windows. Sadly it appeared to be closed for work. there had been a big storm go through the gardens a few years back and it was all still being restored and worked on, damaged trees cut down etc.

And surely this has got to be one of the most beautiful ponds in any garden. A cool and shady retreat on what was an otherwise blisteringly hot day.

What happened to the statue in this alcove we are not sure, however, it was a really cool place to rest for five minutes.

Coimbra is on a hill and the gardens start near the top of the hill and finish nearly at the bottom of the hill. Part way down you get to walk through this oasis of bamboo.

Having got to the bottom of the hill it was an easy walk back to the van. We enjoyed Coimbra but I think anyone who actually went to the university would enjoy it even more.