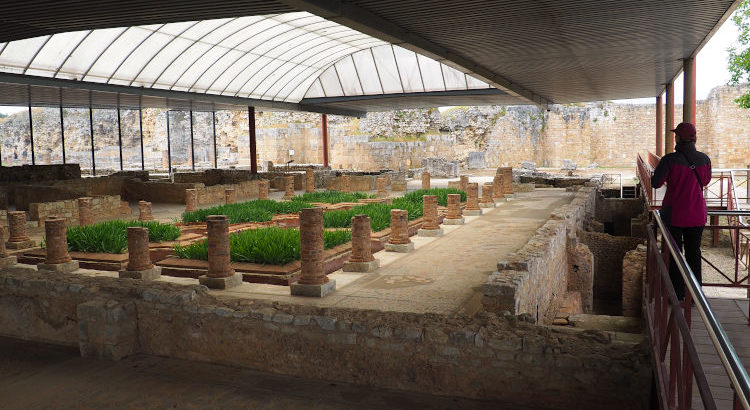 The ancient city of Conimbriga was one of the largest Roman settlement in Portugal. We arrived pretty late in the day and it was cold and gloomy. We could have viewed the site and museum (open 10.00 am to 7.00 pm daily) right away, but decided to leave it until the next morning, with rain was due in from around 3 pm (they got that right!).

Like many archaeological sites, Conimbriga was built in layers. Some of the earliest layers date back to the first Iron Age in the 9th Century B.C.
The Romans arrived in the year 139 B.C., but it wasn’t for another 100 years that the Celtic inhabitants in Portugal were totally conquered.

However, the city of Conimbriga grew, flourished, and then eventually fell victim itself to barbarian invasions until Conimbriga’s residents fled to nearby Coimbra in 468.

Unfortunately, it was an overcast day so our photos are not the best. The mosaics here were stunningly beautiful and it always amazes us how they survived all this time. In Conimbriga they were still very colourful, even the ones which were open to all the elements. They were also numerous and some were massive.

It always makes me wonder when I see the mosaics ‘unfinished’ like this. Can you imagine that in their day they would have been much more vibrant, brushed and washed down daily and finished with some kind of floor wax or varnish perhaps to really make those colours shine? I always wonder what it would be like to see them as they would have been in a domestic setting. I wish I had a time machine – I’d certainly think about starting out with Roman times as my first trip to the past.

When you first walk into the Roman ruins of Conimbriga you can see a high wall in the distance with a road leading up to it and houses on either side, with the one on the right covered. These houses are actually outside the walls, which seems weird. However, it turns out that they used to be inside the walls but a new higher wall (Late Imperial Wall) was built near the end of the 3rd Century when the threat of invasion increased. The stone from those houses etc were used to help build that mighty wall.

The house on the left of the road was named the house of the swastika house, as some of the mosaics in one of the rooms had lots of swastikas. In the Zoroastrian religion of Persia, the swastika was a symbol of the revolving sun, infinity, or continuing creation. It is one of the most common symbols on Mesopotamian coins. The icon has been of spiritual significance to Indian religions such as Hinduism, Buddhism and Jainism. Hitler obviously spoiled the whole meaning of the swastika.

The covered house on the right of the road was named the House of the Fountains. Most of the house was excavated and it had the best examples of mosaic art, mural painting and waterworks architecture known in the city. It must have been a real disappointment for the owner of this magnificent house to have to abandon it when they built the new town wall right across it. I hope they had good compulsory purchase agreements in those days. The house was covered by the new road and partly demolished and then filled it, which is why it remained so well preserved.

This room still had some wall paintings and it had amazingly had some plaster reliefs that were designed to look like wall columns. We cannot remember seeing anything like this in all of our Roman travels.

The house of the fountains also had a basement with at least three rooms off of it, one of which looked like a possible kitchen or where a fire was for maybe underfloor heating. This area also offered another entry area possibly for the house servants (slaves) as on that side of the house there was a pretty decent slope.

Inside the new city wall on the left was a huge house, the house of Cantaber, which is thought to have belonged to a very important aristocrat in the 5th Century. Is it possible that Mr.Cantaber was so important that he decided where the new city wall was built, making sure his house was on the inside.

The house was massive. It is described as the biggest private residence in the city. It was 35,090 square feet. That is 3,260 square meters. It was actually built in the last quarter of the first century, and it survived beyond the takeover by barbarians in 468 and was still lived in right up to the abandonment of the city, in the Middle Ages.

This house had about 40 rooms, across five areas each of which had its own peristyle (a continuous porch formed by a row of columns surrounding the perimeter of the building or a courtyard).

Its owner was so rich he had his own private baths. It must have been nice to have a friend who had his own baths! I’d have been inviting myself over all the time.

Unfortunately, in Conimbriga there is pretty much nothing left of the Forum, very little left of the three public baths and not a lot left of much else. The only other thing that interested us was the city aqueduct, however, there was only one arch left, just inside the city wall.

It was now time to visit the museum. It was small compared to the one in Merida, Spain but it had some interesting things to view.

The mosaics of Conimbriga were definitely the highlight for us and here are two absolute gems that they lifted up and transferred to the museum.

Another Roman gem ticked off our Must Visit list! So far it is estimated that only 10% of the town has so far been excavated so this site is always evolving. Maybe new treasures will be found for us all to visit in future.