Walking in the footsteps of the Knights Templar in Castro Marim 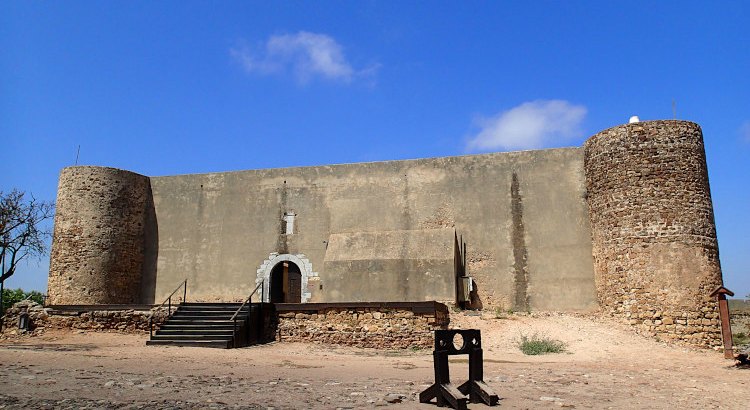 Our first stop in Portugal was at the tiny town of Castro Marim. Nigel picked it for the historic castle which rises high above the town and overlooks the river and coastline that divides Spain from Portugal.

The town has been important for defensive reasons since before Roman times and also for trade with Pheonician ships as it sits at the mouth of the Guadiana river which stretches up 515 miles into Portugal and Spain. However in the 17th century, as the course of the river changed, the town became landlocked and was no longer the booming port. Today it relies on a little tourism and is surrounded by large salt farms, fed from the estuary, now several miles away.

So what’s the draw with this castle? You only have to say two words and suddenly it all becomes clear – Knights Templar!  This castle formed part of the defensive line controlled by the mysterious Knights Templar. The history of the order is quite different in Portugal to, say, in France because they had the protection of the King and were not persecuted and abolished as they were in other countries.

What can you see today?

The original keep, chapel, defensive walls and ramparts, towers and some ruins of the internal buildings in the castle courtyard can still be visited. There is a small museum inside the keep, a history of the town, castle and Templars described inside the chapel and also a disturbing medieval torture museum.

You are free to climb about and explore.  Once a year, in late August, the town holds a big medieval fair in the castle grounds. It’s not the most picturesque of castles, we struggled to get nice photos, but it’s certainly worth stopping for a visit if you are traveling between Spain and Portugal.

We love to visit sites like this, where you can place your feet on the original stone steps, worn smooth by the footfall of those before you over hundreds of years. It feels magical to walk the same paths, roads, staircases and floors that the Knights Templar walked on 700 years ago.

Where to stay with the motorhome

The town has an official free motorhome camping spot at the foot of the castle with water and waste facilities. EHU can be used with a token. There is a supermarket just across the car park and a few nice restaurants in town.

Check out our map and route page to click on the icon on the map for more details on the location of the motorhome parking.