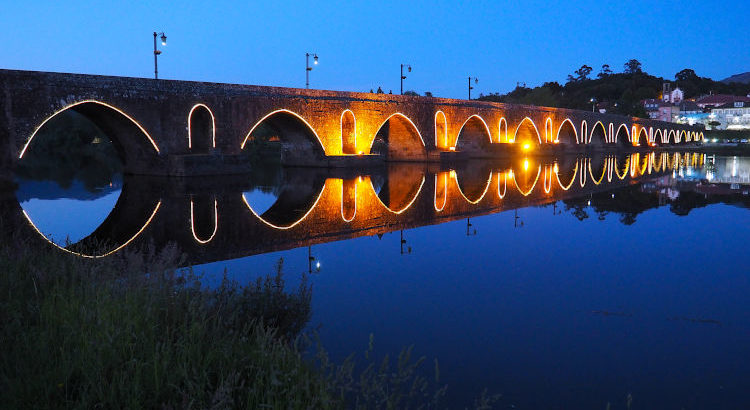 So why do people come and see Ponte De Lima? Well for a start it is considered officially to be the oldest village in Portugal as it was founded on 4th March 1125. But that on its own surely isn’t enough.

Ponte De Lima is named after the long medieval bridge, built in 1370, that passes over the Lima River that runs next to the town. It’s a beautiful picturesque low-level bridge that really is a gem.

The town even has a Roman history which was again a reason why we wanted to visit. This location has been the main river crossing for the area since the Romans constructed the original bridge here in 1AD.

During the early Roman rule of Portugal, they believed that the Lima River was the Lethe River, one of the underworld rivers of Hades. They were fearful as they believed that anyone who immersed in its waters would lose their mind to Oblivion and go mad. Yikes!

General Decimus Junius Brutus was forced to test this superstition in 138 BC (before the bridge was built), during a campaign into northern Spain. He bravely crossed the river first on his horse and then to ensure his men didn’t get “lost to Oblivion” and to show he hadn’t lost his memory, he shouted out their names as they braved the waters. This first crossing of the Lima River is commemorated by the Roman statues on either side of the river banks.

We stayed at Ponte De Lima a couple of nights so we even got to take photos in the evening. It was a beautiful still night with a full moon and the river was just perfect for taking pictures with reflections of the town and river.

It’s a quaint town where one of the original towers and some of the original defensive walls remain. You can actually climb up one piece of the wall and walk between the houses now built on either side. The lower floor of the tower now houses the tourist information office.

There’s also a lovely walkway along the side of the river, with a large tree-lined promenade.

Ponte De Lima is part of Camino de Santiago (Santiago’s Road), which is the name of a number of routes of medieval Christian pilgrimage that go to the tomb of St. James, located at the Cathedral of Santiago de Compostela. We were obviously on the Portuguese route of the Camino de Santiago. We walked a portion of the walk following the river and saw quite a few serious walkers doing the trek with their backpacks and walking poles. It is a very beautiful part of the Portuguese countryside with lots of vineyards, and such lush green countryside and gardens.

Tourist literature frequently boasts of Ponte de Lima being the “most floral town of Portugal”, and again this is no overstatement. During the Festival Internacional de Jardins, the town is awash with flowers, and sweet floral scents waft from the numerous gardens and parks.

The ancient pretty town of Ponte De Lima is perfectly set up for tourism with lots of great places to park cars, motorhomes and coaches. We parked across the river from the old town, in the car park for the Flower Festival. The parking was free on a hard standing surface, but besides bins, there were no other facilities. The sat nav coordinates were 41.767225 -8.591823.

It was quiet at night but throughout the day it seemed to be a known rat-run by the locals, so there was a surprising amount of passing traffic, but very few who actually parked their cars. Scruffy enjoyed it here and went for long walks at night.